She was born on January 1, 2004 and came into my life on February, a little ball of silvery fluff with a gold mask. Her ears were sooo large as to be comical on such a tiny head.  She complained so loudly when the Pet Refuge center person put her in a cardboard carrier box that I took her out and tucked her inside of my shirt and, warm and comfortable, she quieted and snuggled against me.  When we arrived home I showed her her litter box, which she promptly claimed and used.  After that we explored the house together and I instructed her on house rules – no jumping on tables or counters, plants were to look at, not to eat.., and all the other regulations.  I have to believe that is the time when our bond started to form, as, when I sat down on the sofa, she jumped up into my lap and promptly went to sleep.

In the insuing years she became my shadow and constant companion whenever I was home.  In her youth she was playful, in the extreme, often wearing me out instead of the reverse, but, in all, was a complete joy.  There were times when we had long and meaningful conversations…, she was a very vocal little girl. 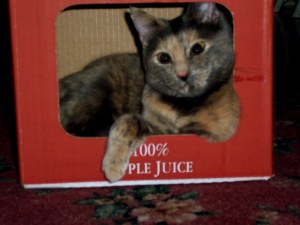 As years passed she became much more like the house royalty that she was (in her mind), and developed a quiet dignified personna, preferring long quiet naps in the sun to chasing toys around the family room. She also started to prefer sleeping beside me on the bed instead of her box in the laundry room.  It seems I was consistently  warmer than the blanket in her box, and I didn’t mind at all.

Most evenings she would join me as I watched television or read a book, and sometimes when at the computer, come to lay on the printer and watch what I was doing.

All through the years she was such a healthy, happy girl who filled her days, entertaining herself (and me) with silly antics…, and giving out tons of love.

Then, about a year ago, she started to become reclusive and lethargic.  Thinking that maybe it was just that she was getting older I didn’t worry too much about it…, that is, until she had her first seizure.  That was an extremely terrible experience.  Took her to the vet and he prescribed meds to help keep her calmed and reduce the chances of further seizures and it seemed to be working well…, until last week.  Last Monday she started the day alright, but by noon she was having constant diarrhea and a seizure almost every 30 minutes.  I called the vet and he wanted to see her as soon as I could get there with her. In the middle of his examination she had another seizure and attack of diarrhea.  He asked how long she had been having the attacks and, with a sad face, told me, “I can’t tell you what to do…, won’t tell you what to do, but she is in a lot of pain and there’s little I can do for her. She’s 17 years old and………..”  It was like a punch in the gut !  I had known this moment would be coming and had tried to be ready for it.  When this comes, is anyone really ready?  I really wasn’t.  His assistant gave her an injection to calm her and stop the seizures temporarily.  The vet looked at me questioningly, waiting for me to decide and say something.  Finally I asked if there was really nothing else they could do for her.  The reply was not comforting, but what I expected to hear.  The assistant wrapped her in a  clean, warm towel and put her my arms.  I couldn’t say anything, but I nodded my head to the vet and he said, “It’s the last gift you can give her, my friend.  You can give her peace…, and the final very gentle act of love.”  They brought in a small kit and gave me a few minutes alone with her, returning then and injecting her with a solution that gave her a very peaceful death.  The assistant listened for a pulse and turned to me, “She’s passed.”  A part of me passed with her.  She was more than just a cat, a pet, an animal.  She was family, a dear, faithful, loving companion of 17 years.  In cat years she was nearing 90.  This all happened week ago.  Even though I know she’s not there, I look for her in chairs where she used to sleep, the carpet where she would lay in the sun, and wait for her to come to the den to sleep in my lap while I read.

Sleeps with the angels

3 thoughts on “She Sleeps with the Angels”