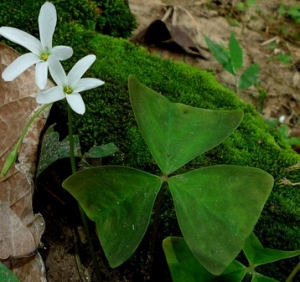 Many sites will tell you that the little trefoil known as the shamrock was once known as “seamróg“, pronounced “Seamroy”, meaning “little clover”. They also mention the fact that it is a very common clover that grows heartily in Ireland.

Many agree that the ancient Druids honored it as a sacred plant. The Druids believed the shamrock had the power to avert evil spirits. Some people still believe the shamrock has mystical, even prophetic, powers. It is said that the leaves of shamrocks turn upright whenever a storm is coming.

According to Lady Wilde, the shamrock “enlightens the brain and makes one see and know the truth“.

The ancient Irish Celts also revered the shamrock because it has three leaves, and they considered “3” to be a sacred number. The ancient Celtic Druids believed many numbers held mystical powers.

This Celtic tradition of honoring “3’s” continued in Ireland for millennia.

May the worst o’ yer problems

Be a peaceful sleep,