There’s a moon out tonight

Fills my eyes with its light

There are stars out tonight

Make the skies so bright 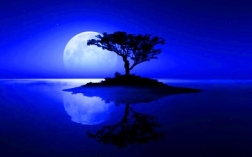 The moon and stars light a sky so bright

There is joy and love on this eternal night

He sat in a hooch in a distant land, cleaning and re-assembling his equipment.  It was quiet except for the occasional loud laugh or expletive from one of the others in the hooch.  He didn’t mind the noise so much because of the brotherhood he shared with them.  Conflict and combat creates bonds between people with whom they would not normally share, but here, in this humid, hot, dirty, jungle hell hole they were all brothers, looking out for and protecting each other, and sharing thoughts and feelings that they would normally hold inside as too private.

Memories of his recent past had been heavy on his mind for days now.  How could life be so unfair.  Their lives had only just begun, their plans and dreams all lay ahead of them…, til that December night.  It seemed as though his life had ended that night when she lay, dying, in his arms at the hospital.  Everything in this world that was most important to him was abruptly cut off when she closed her eyes that final time and that last raspy breath left her.  His beautiful wife, their unborn child, the sweet life and love that they’d shared…, gone with her last heartbeat.  He kept recounting all the moments of their time together from the night they met to those final moments, detailing each second, minute, hour, and day, committing them to memory so as not to lose any part of her.  Quite often, unbid tears would run down from his eyes and the others would just quietly give him space and privacy to mourn, all now knowing his story.  By morning he would be alright, alert and dependable as always.

The new day dawned, grey and wet.  They had orders to report to a new LZ to set up a mobile tower for helicopter traffic control.  He packed his gear and joined his crew walking out to the helipad and they discussed the upcoming job.

A shot rang out from the edge of the trees, about a hundred yards away…, a sniper.  He felt the impact as the bullet entered his left side and slumped to the ground as all strength left him.  There was a bright light in his eyes and through it he saw her walking to him, reaching to take his hand, “Come darlin’.  It’s time to go home now.”  Their hands entwined he rose and followed her into the light.  Then, looking back, he viewed the shell of a body that had served him for 19 years and saluted it with this final thought…, “Mission accomplished, I’m going home”.

For all the brothers (and sisters) who served and never made it back.  This is for you.