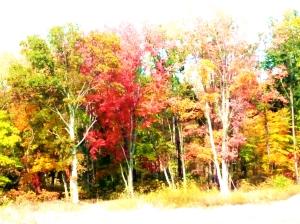 Several busy days passed.  His work kept him busy through the day and the late afternoon and evenings were taken up with improvements and repairs to the house.  Autumn was here and he didn’t want to be thinking of what he should have done when winter showed its frigid face.  He needed to fertilize the lawn, small though it was, and level the gravel in the lane and driveway.  One day he hoped to have it paved.  The gutters and downspouts needed to be cleaned.  He’d purchased a material to put in the gutters to block leaves from clogging them and the downspouts so there wouldn’t be ice building on the edge of the roof and icicles  hanging from the gutters.  There were some windows and doors that needed to be caulked and then he thought he’d be ready.  All this done, it was time to get some wood for the fireplace for a nice cheery fire through the winter.

It was a cool evening and he’d worked late stacking firewood and cleaning up the garage.  Thankfully, over the summer, he’d discovered the magic of a slow cooker and a timer, and dinner was warm and waiting for him.  Tonight was beef stew and he filled his bowl, grabbed a couple slices of bread, and settled in front of the TV.  Ghost made an appearance as soon as she smelled the beef and, consummate beggar that she was, implored him for a share of his meal, only the beef, of course, and with a little gravy.  It was not a good television night so he turned the set off and switched on some music to enjoy while he ate.  He had been thinking of the property on the lake…, and the cottage.

After dishes were done and put away, he and his feline shadow retired to the couch in front of the fireplace and he opened his laptop and started some research….  He went to the county recorder’s website and started searching for a land platte south of his property.  The notes on the records showed that it was owned by the county, repossessed for unpaid taxes and was available for sale.  It would be a prime piece of land to own because it had a large lake frontage.  Ideas started to form in the back of his mind.  He’d have to follow up on this and find out how much outstanding taxes were to be paid.  From what he read, if an individual paid the outstanding taxes he would receive deed and title to the property. Hmmmm…..  At that point his eyes started to close and his chin settled on his chest.  Ghost curled up against his leg and was soon asleep too.

He awoke suddenly about a half hour later, scaring the cat and knocking his bowl and spoon to the floor.  It had been a long day and he didn’t realize how tired he really was.  He took a quick shower, was off to bed, and that quickly asleep.

Visibility was poor…, hazy, foggy, but he was on the trail back to the lake…, to the cottage and it was so familiar, as though he’d been there a thousand times before.  The trail wasn’t a trail this time.  It was a wagon path, groomed on both sides and level, and smooth as though it had seen much use.  As he rounded the turn the cottage came into view.  It looked as though it had only recently been built, like a new home.  a figure appeared in the shadows of the porch…..

“I’m so glad you’re back.  It’s late and I was so worried that something had happened to you on the road…. “

Her arms embraced him.  She, as always, felt so soft and warm, her head against his shoulder.  He felt her gentle, tender hand caress his face….

Just as it had came…, in a hazy fog, it ended.  He woke and through groggy, sleep filled eyes, saw Ghost nestled on his chest, her furry tail laying against his cheek.  He laid his head back and closed his eyes….  Too bad, that had been one of the best dreams he’d had for a long time…, and, at the same time, one of the most troubling.  He knew the cottage was in shambles, and the trail to it was barely noticeable, yet in the dream they seemed so new.  He, once again, drifted off to sleep…,peacefully this time.

As the sun broke through the windowpane in the morning he looked out to see, once again, footprints in the dewy grass leading to the trail…

That day, during his lunchtime, he went to the county recorders office to ask about the property on the lake.  Yes, it was available for sale, basically for the amount of taxes due.  In the notes the clerk said that the property had been recently indicated as vacant land as the house had been condemned as uninhabitable.  The sale price would be in the range of $20-25 thousand.  In his mind, it would be a good investment, even a better place to live, and he could sell his house to offset the purchase and repair expenses.  He needed to consider the whole idea more.

After returning home that evening he sat on the deck, thinking…, why am I doing this?  Why am I even thinking about it?   He looked down a the old tintype he had absentmindedly carried out there with him, staring at it as though, somehow, it had come to life.

She was pretty…, not the most beautiful girl in the world, but there was a warmth and a beauty about her that was hers alone.  He knew he’d never seen her before finding this picture.   Why, though, does she look so familiar…? 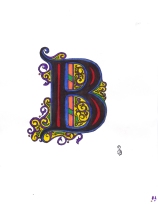